I picked up this Beaker print at the Punk Rock Flea Market in Philly a few months ago. We talked about it and determined that Beaker needed a distinguished look, so I decided on Wenge and two layers of mat. This will be hanging in our in the reading corner of our living room. 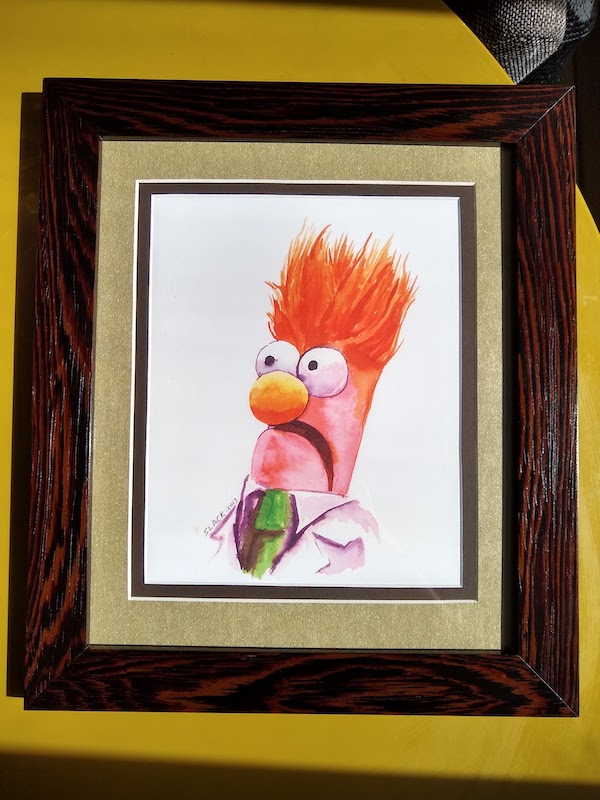 Dead Kid in a Meadow

Framing this painting was a bit emotionally-taxing for me as the subject is a dead kid laying in a meadow and my son was 4 years old when I made it. The artist is unknown and there's no known title for the painting so I'm left with "Dead Kid in a Meadow". Watching my son grow is witnessing him explore the world and for that to be taken away would be snuffing out the light of life while the world is still magical, so I decided to go with the theme of a coffin lid closing on the wonderment of youth. I found various public domain images (two of which are a map of Treasure Island and a page of the Voynich Manuscript) which I printed and soaked in Lapsang Souchong tea to age, then decoupaged onto a base wooden frame. The coffin lid is simple strips of pine rubbed with dirt which were then glued and nailed onto the base frame. It's only when the viewer gets close enough to the subject of the painting that its unsettling theme is revealed. To draw the viewer closer, I wanted to make the frame itself a bit unsettling when seen from a distance. To achieve that, while the edge of the inner pine strips are true, a straight line cannot be drawn between the bottommost edges, which I hoped would subtly capture the viewer's eye.

Given the content, I was happy to get the painting out of my house, but framing it was an interesting emotional exploration and I'm very happy with the result.

While more geared towards writers, I drew inspiration from Maps of the Imagination: The Writer as Cartographer by Peter Turchi. 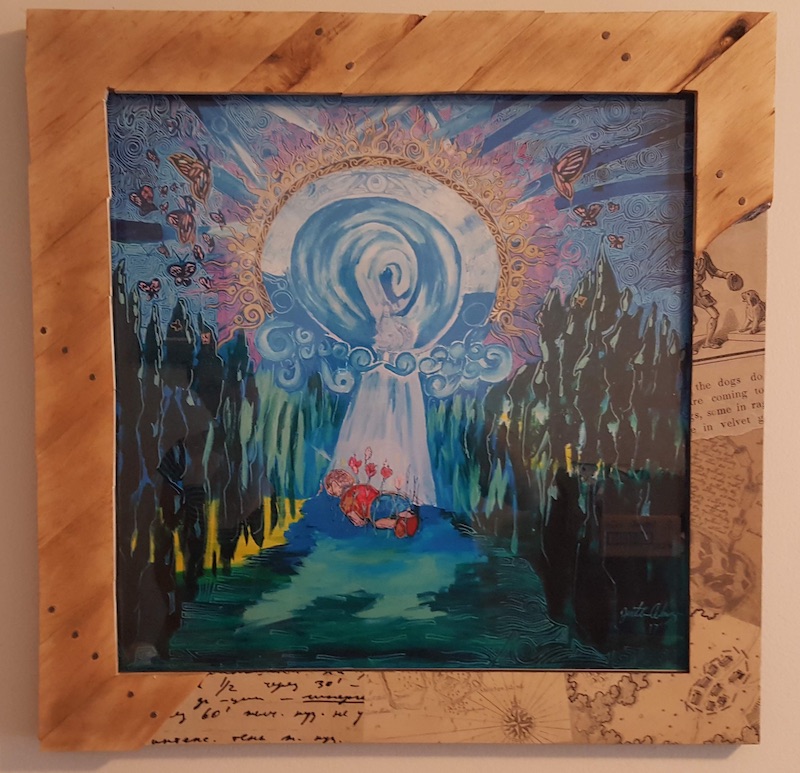 If there's one thing Adam loves, it's cars. 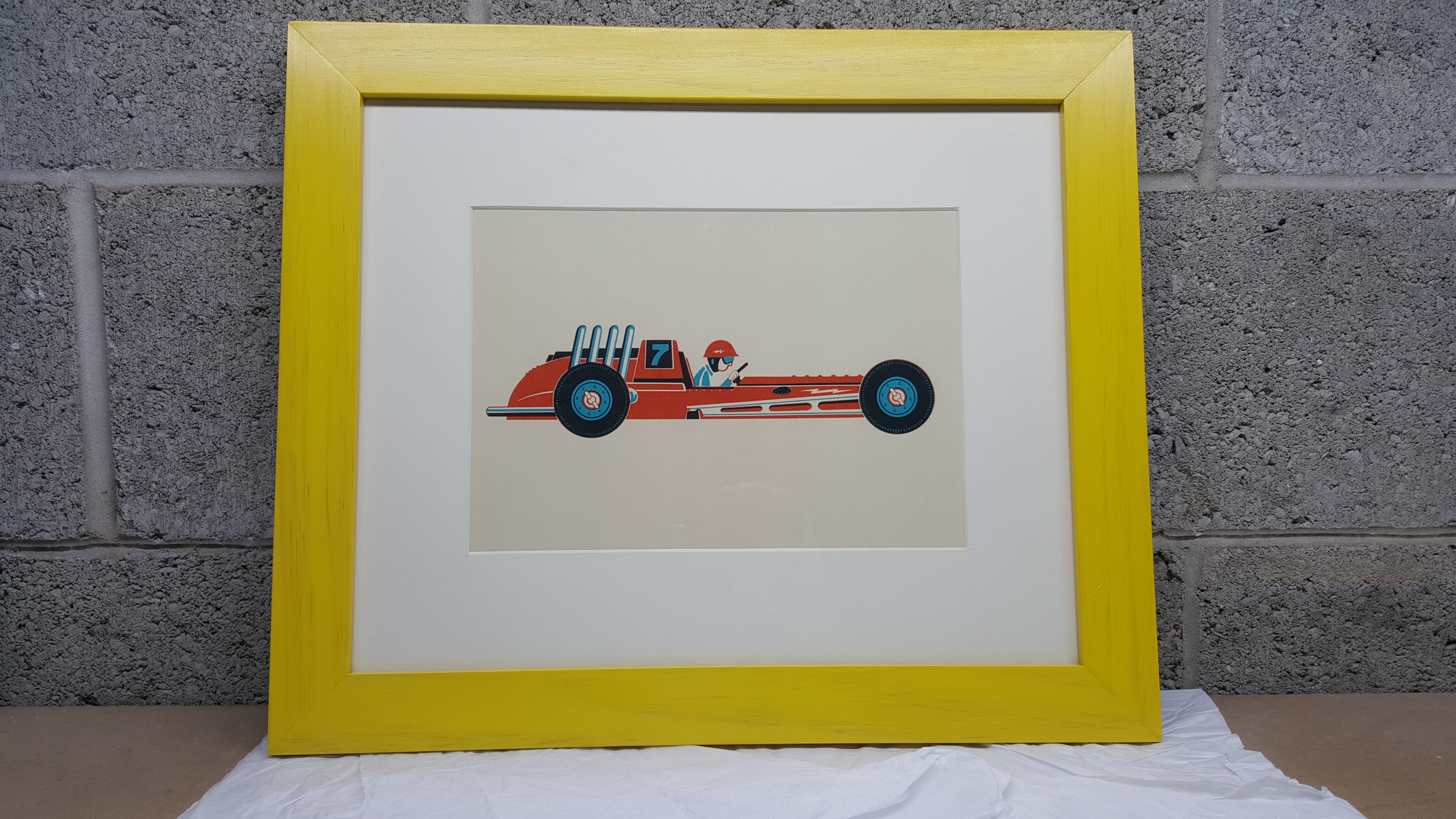 This frame was made for a friend in exchange for some family photography. I decided to go with the "scorched oak" technique, which works especially well with quartersawn oak as it produces ribbon-like patterns across an otherwise straight grain. To achieve this look, I build the entire frame complete with splines, char it with a blowtorch, wait until it cools down, scrape out the char with a wire brush, wipe away the dust with wet rags, let the frame dry, then coat with 3 applications of urethane. 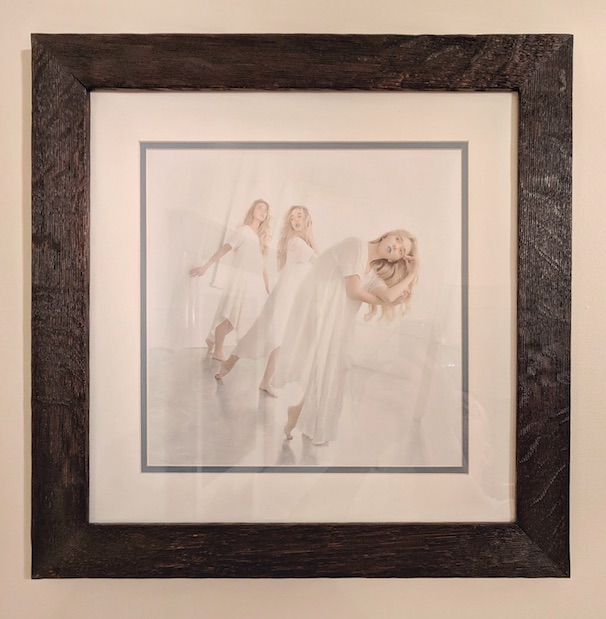 Adam on the Nova Scotian Beach

I captured this picture of Adam in the middle of him running and jumping at Hirtle's Beach in Kingsburg, NS . I've never really liked straight up driftwood for frames (it looks a bit kitschy), but wanted to capture a sort of weathered look and spalted maple fit the bill pretty well. Spalting is an interesting coloration effect on wood from fungi that can either be found naturally or introduced artificially. There's no finish on the wood.

Original for more detail can be found here. 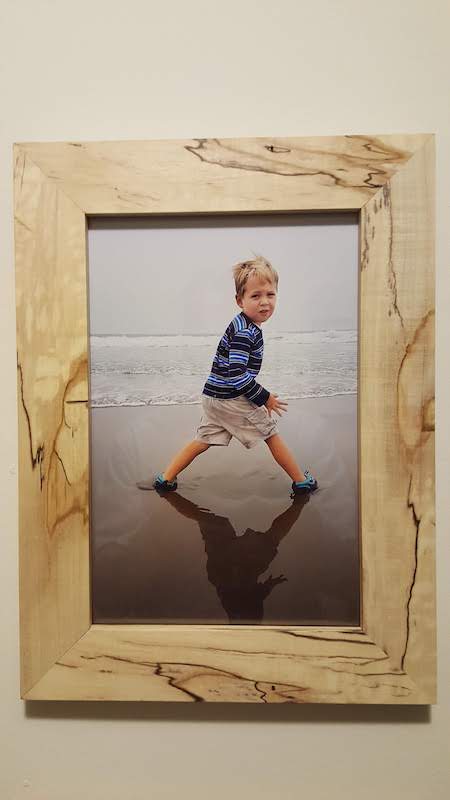 This frame of a print of the Statue of Liberty was designed and built as a wedding present for friends. 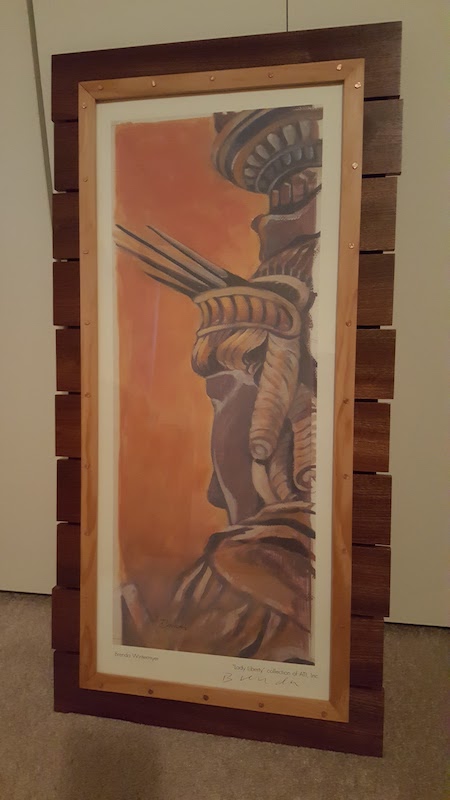 I framed this for a friend with a fondness for horses in exchange for some pottery (though as of November 2018, I have not received this pottery). The frame is made from walnut and employs farrier nails obtained from Carousel Park & Equestrian Center in Pike Creek, DE where New Castle County trains their mounted police. I worked the farrier nails into a partial horseshoe shape and glued them to the frame. 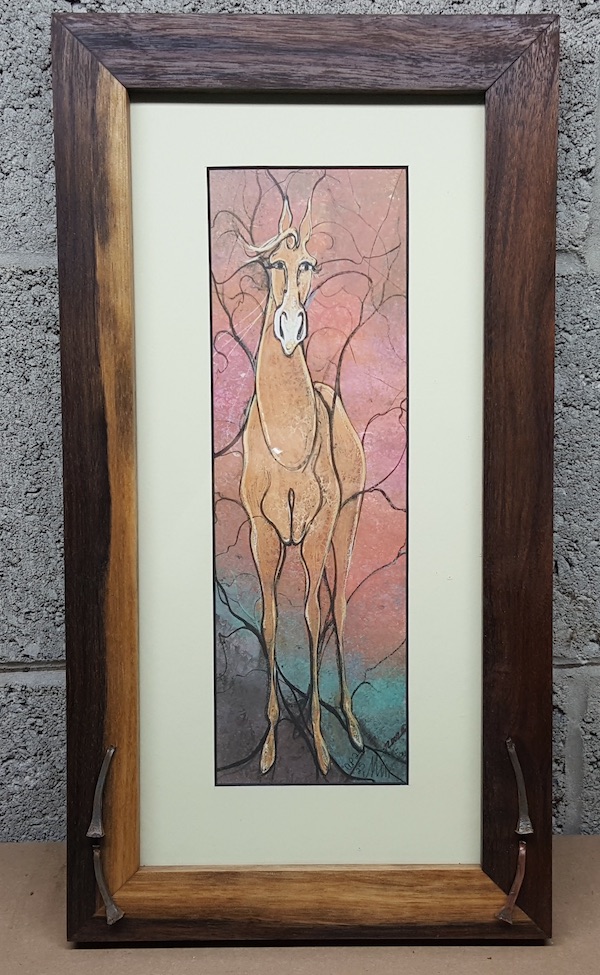 This frame is titled "Interstitial" and was made in trade for a really nice case of beer.

The print was already matted, though the front layer had buckled a bit, so it had to be replaced. The inspiration for this frame was the art deco movement coinciding with the advent of Mickey and Minnie Mouse and the beginning of the end of the silent movie era. The black isn't inlay, it's just multiple layers of black enamel paint sanded flush. 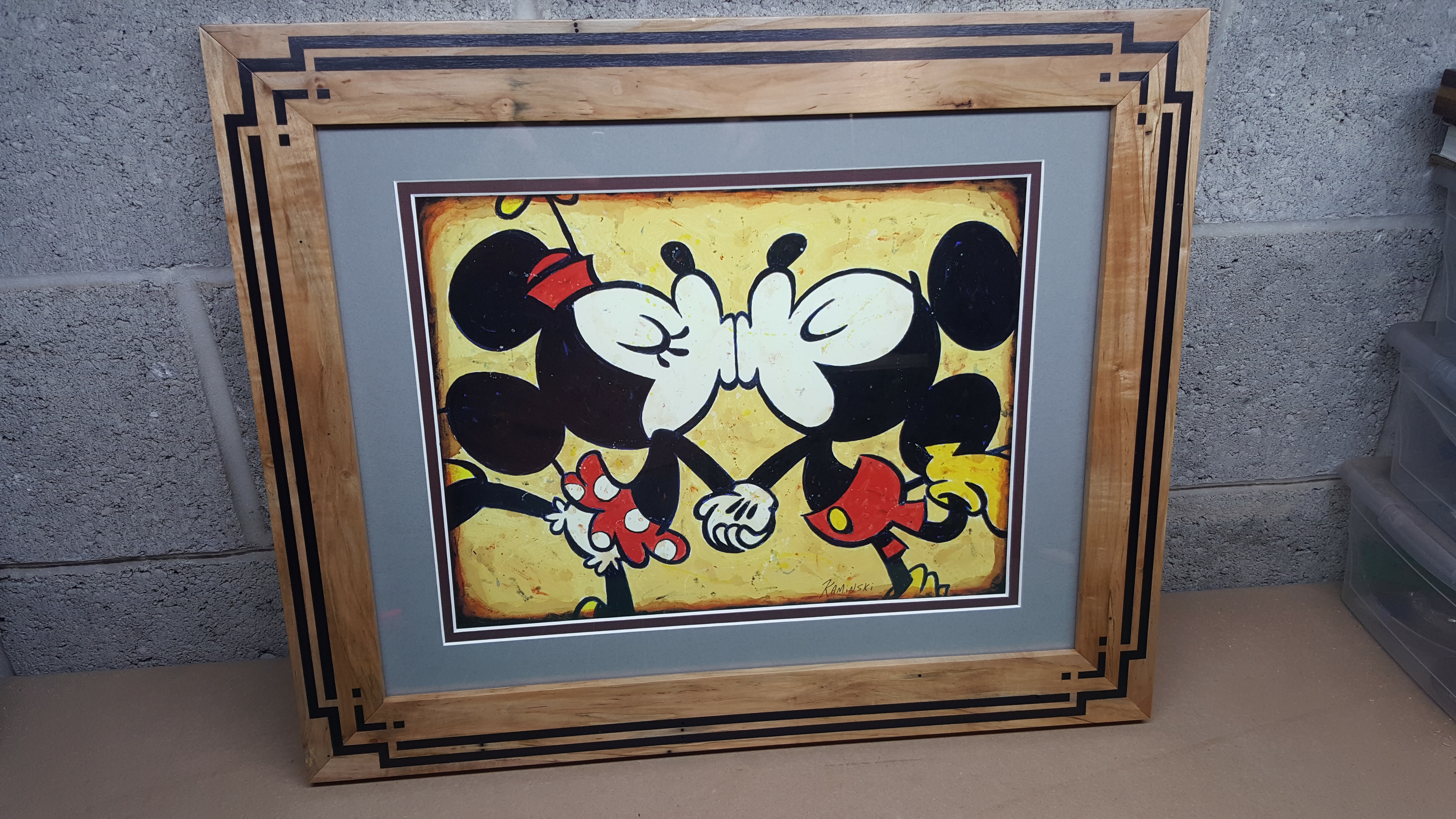 1872 Map of Spain and Portugal

This 1872 map of Spain and Portugal was purchased by a colleague of mine at Mapzen while traveling in Europe. He was very patient with me trying to learn node.js when I first started at Mapzen so I offered to frame it for him in thanks. It's currently hanging on his apartment wall in Manhattan. 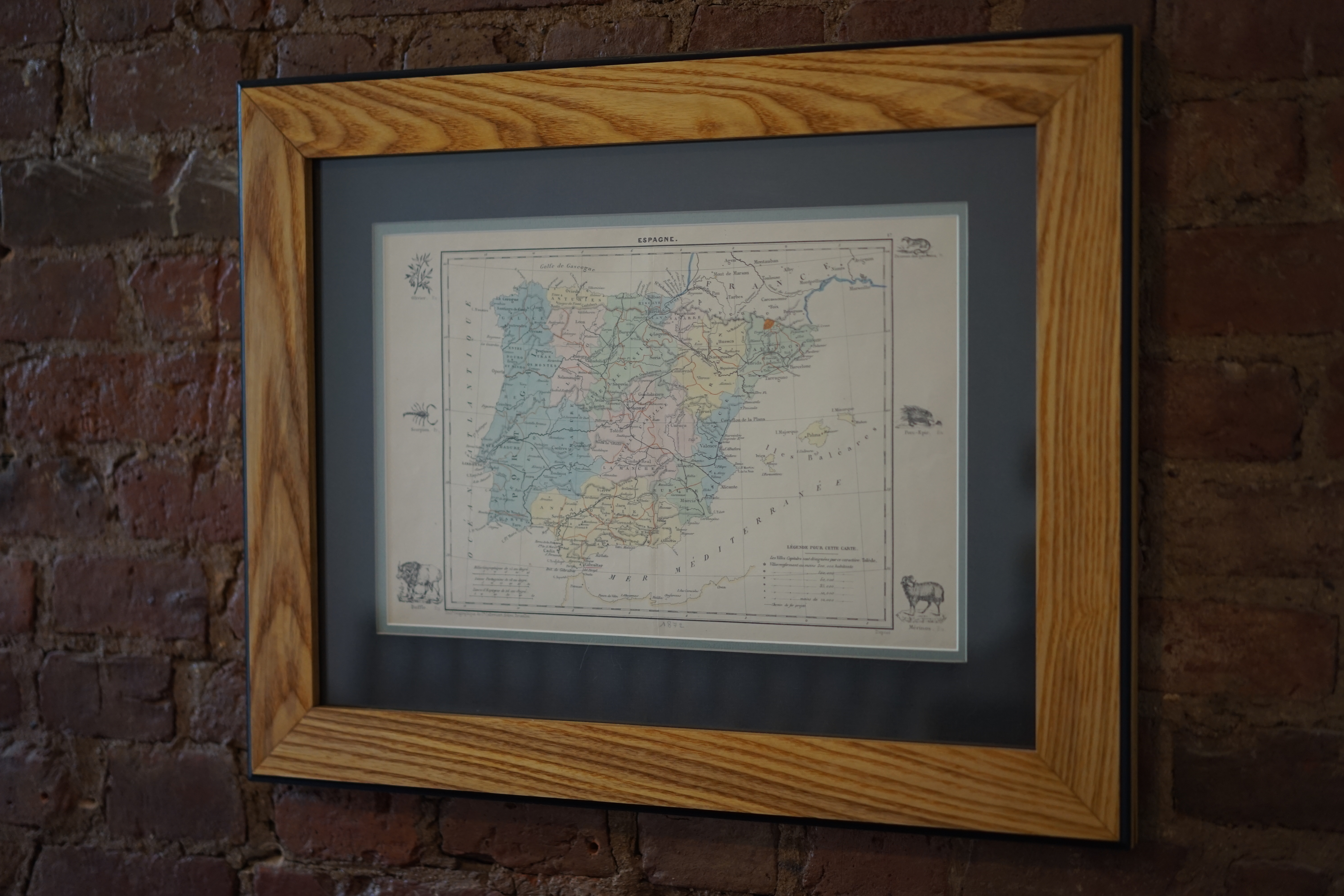 This is the third in a series of frames I'm making to hopefully represent Adam's childhood that I give to him as a present on his birthday. Jules Verne had a yacht named the Saint-Michel I that I thought best captured Adam's emerging adventureous and curious spirit. The constrasting coloration was achieved by applying a single coat of ebony stain which was then sanded off leaving the deep grain dark while restoring the top grain to the original color, and then applying a single coat of Early American stain. I painted a simple compass rose in the bottom left corner using silver enamel paint. 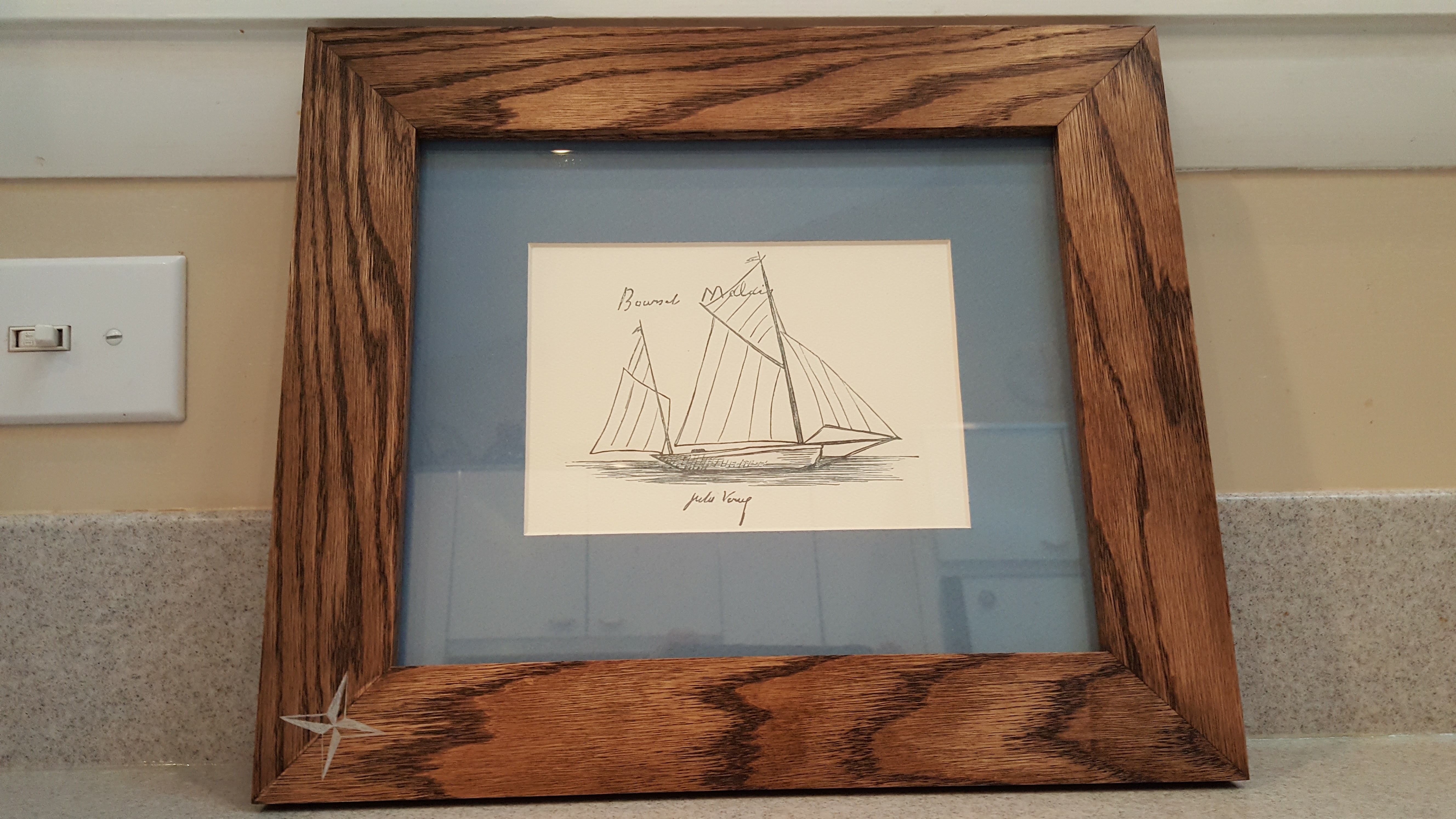 This frame was made for a friend in exchange for some family photography. I really liked the book theme and wanted to capture that in the form of a library. I drew inspiration from the novella The Breathing Method by Stephen King in which an attorney starts visiting a wealthy men's club in Manhattan where strange things are seen and understood to be happening but questions are expected not to be asked. The club houses fantastic books no one outside has ever heard of, a pool table of outstanding construction by a company he can find no documentation on, et cetera. The books are made of pine that I shaved rough spines into with a hand-planer and painted with colors found on book spines in the 1930s thru the 1950s. They have no discernible character sets, titles, or figures as I did not want to draw attention away from the print itself. This is one of the biggest frames I've made and measures roughly 3'x3'. This is one of my most ambitious frames and I am pleased with the outcome.

Brooke Shaden's prints can be found on her gallery. 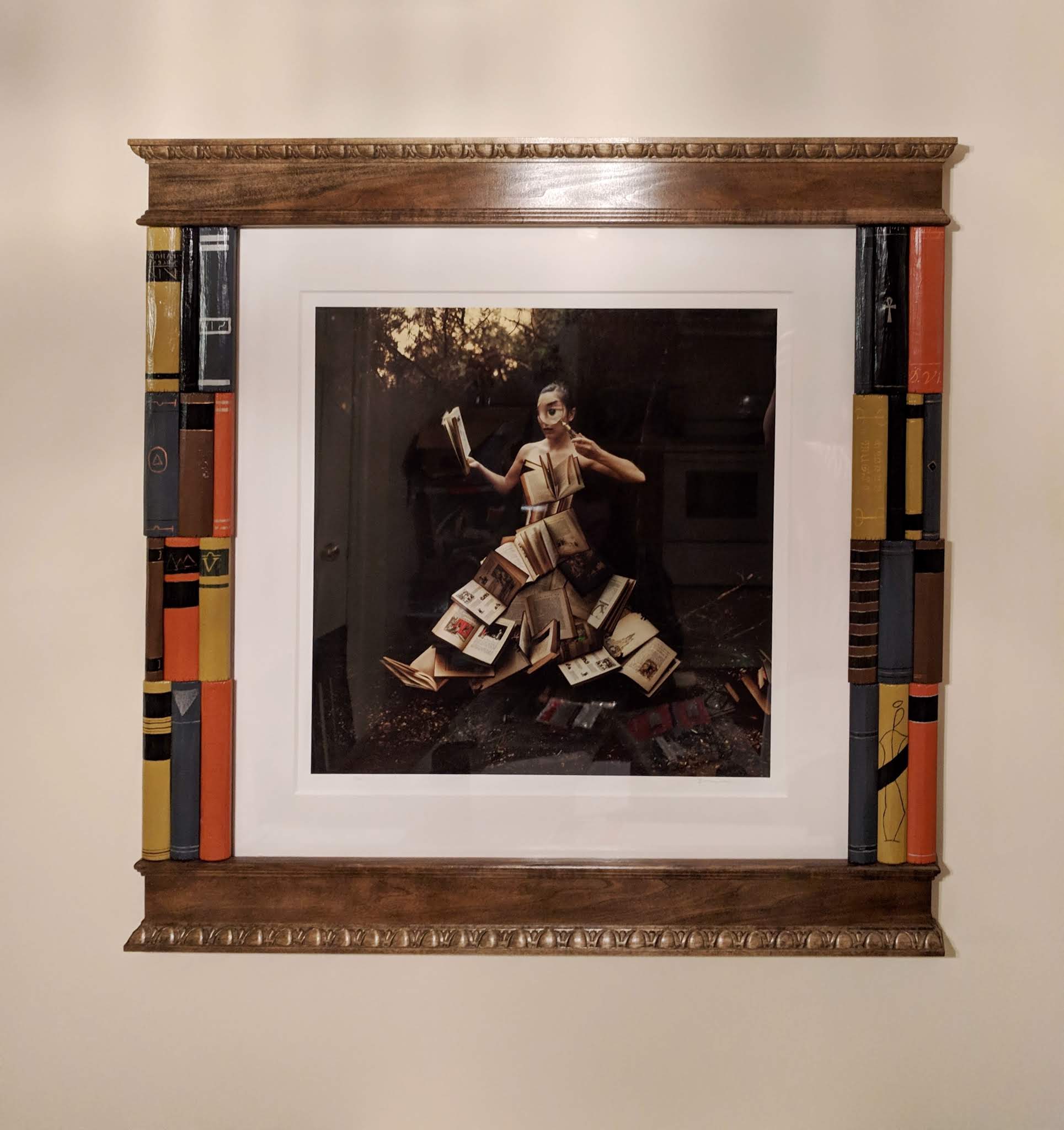 I mostly try to frame original artwork but my wife really likes octopodes, so I bought this print. The frame is made from pine with 4 different sizes of circles to create the bubble effects using light and dark blue paints. 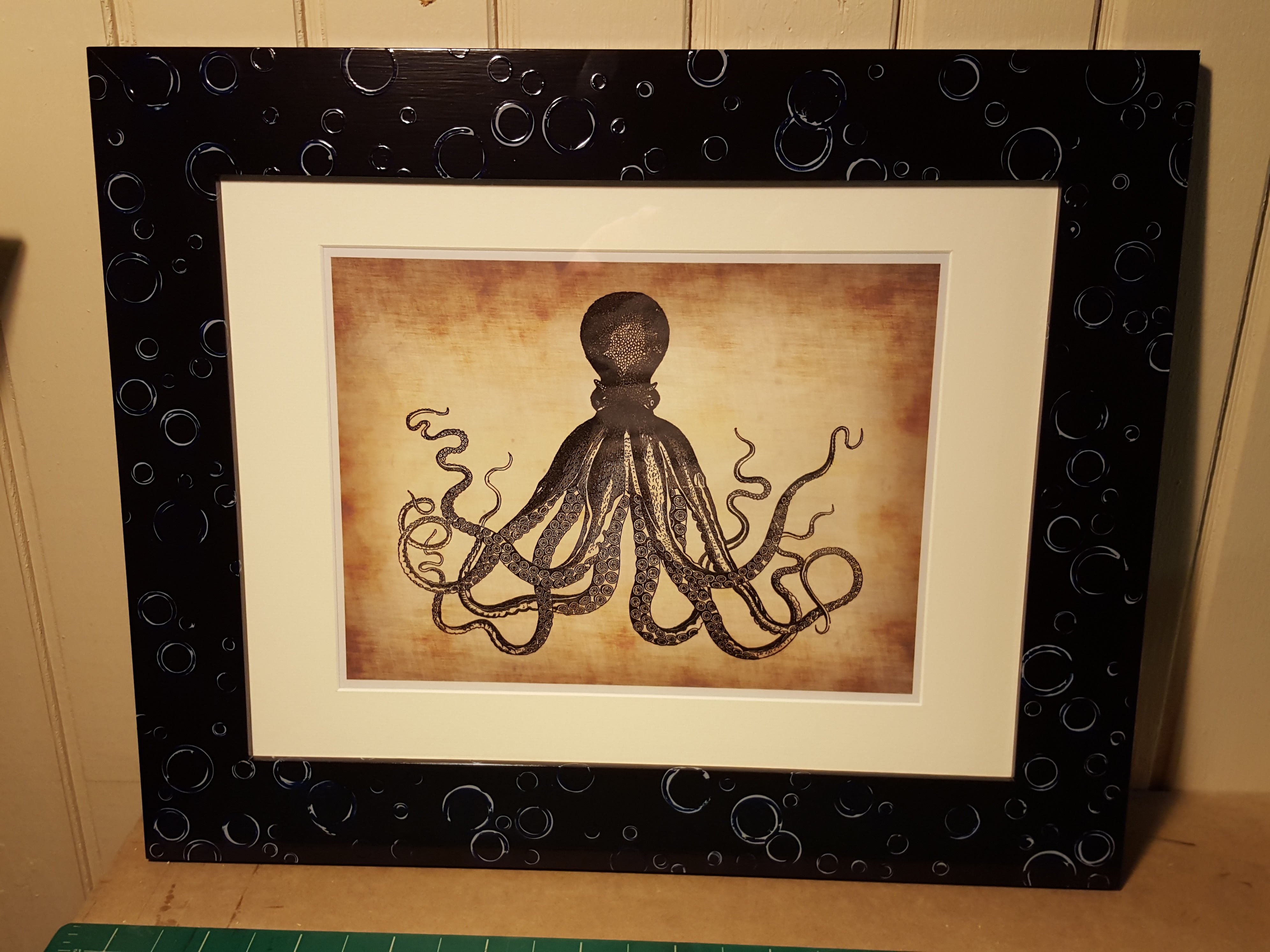 Older posts are available in the archive.